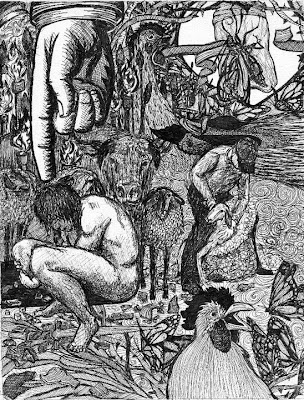 When approached to present a performance piece for the opening exhibit entitled, “Preludes” to be performed at the Salt Space in Manhattan, I decided to take on the emotional mindset of Jesus Christ as he made His way to the Garden of Gethsemane. I consider this a daring challenge, and as such, I could not pass up.

Research began with Biblical texts from the four gospels as well as Peter Gabriel's music on the Passion. I also focused on Mel Gibson's movie version that starts the opening scene in the Garden. Having performed in Israel, I also draw on the memories of that environment: its culture and long history. This is probably the most physical and intense of performances I have taken on in dance, and all this on hard wood floors.

This is also a collaborative effort with percussionist and drummer, Anthony Taddeo. I wanted to have him present sounds that were not as what the western ear traditionally hears.

Anthony uses a 5 piece drum set, a Cajon from Peru, and a frame drum from North Africa. He uses a combination of different beaters depending on the emotion that is being evoked and the tempo; and trying to find the balance between interaction with the dancer and what he feels the music is trying to convey through an amazing story.

Mickey Miklos’ handling of the lighting in this performance greatly enhances the mood of the piece. He transfixes the space and lights the walls that casts haunting shadows of the performer; with deep dark colors surrounded by complete darkness, Mickey’s skill has helped provide an eerie and intense feel.

I wanted to wrestle with the thoughts and struggles while in the garden that He (Jesus) endured between His “humanness” and His “Godness”. Knowing His mission from before the beginning of time, and now with the time now upon Him, how greatly He revealed this duality in such an intimate setting. Jesus was sorrowful to the point of death! Sweats of blood! He cries out to His Father to have to have Him excused from the very point of His earthly calling. Why?

I have entitled this piece “Agony”.

(Sketch by: Gwen Hannan Meharg)
Posted by MAXIDUS at 12:30 AM

MAXIDUS
New York
Maxidus is a multi-dimensional artist, musician, dancer & performer. He has charmed audiences all over the world to the rhythmic beat he calls “urban alternative”. His classical background gives rise to his vocal artistry & range unheard of in musicians of his genre. His music has structure, depth & meaning. The breath of possibilities is endless... The Maxidus Vintage Show has been a well-known display of his global artistry. Striking in looks, the show blends music, lights & dancers displaying a mesmerizing sense of tantric pleasure – full of radiant energy; never ceases to have audiences beg for more. Maxidus' electrifying ballet performances, modeling career, & choreographic productions all lead to the artist's unwavering sense of mastery. His music is well crafted with discipline, detail. He is a force to reckon with, a singer you'd carry around. It's almost as if he's a legend before he's heard. The overall picture of this artist: sculpted to perfection, talented like an academy, choreographed for the heavens and blessed with poetic bliss, speak nothing, nothing short of greatness!